Author Walter Lawrence grew up in Texas, where his father practiced veterinary medicine and his mother taught nursing. He and his sister were raised in a family that valued the origin and meaning of words.

He majored in English in college and later earned a Masters of Arts in Professional Writing. Walter has published numerous freelance magazine and newspaper articles, and both his poetry and short stories have won numerous awards.

“Everybody has a story. One of the reasons I talk to strangers is to find out what cool story they have to tell me. When I’m writing, my mind pulls up those stories and I’m able to use them. People cross your path for a reason and you don’t always know what it is at the start.” ~Walter (T.W.) Lawrence

Listen to Walter’s Art as Worship interview on Empower Radio.

Walter’s latest artistic venture has been to write and record stories specifically as audio downloads on Audible and iTunes.

He says, “Upon reflection, I was divinely led to create this series of short stories called Dusty and the Cowboy. The door was opened and I had sense enough to step through. After hearing an audio recording of Dusty, the first story in the series, I realized the unnamed cowboy was me. The cowboy was looking for direction, asked for divine help and began his journey. It’s interesting to see the doors that have opened. I’m following the path to see where it takes me.”

He recently made his first Nashville recording to be used as the theme song to the audio of Dusty and the Cowboy. Walter writes under the pen name T.W. Lawrence.

Walter’s advice for other writers, “Be yourself—you have to find your voice. To do that, you have to listen and trust the voice inside of you. You have let go of this world and open yourself up to the world of creativity and the world of divinity.”

Visit www.projectdusty.com for a free download of the short story Dusty. On Amazon and Audible, find printed and audio books by Walter (aka T.W. Lawrence) with titles Take Me To Texas, T.W. Lawrence’s Cowboy Collection and Dusty and the Cowboy. Audio books are also available on iTunes. 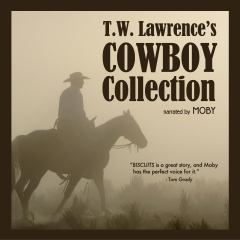