Paula, dream consultant for PEOPLE Country Magazine, is a book coach, and dream and tarot intuitive.

You work in several medium(s). Can you tell me more about how you create your art?

For years, I worked in both fiber and in words. In fact, my MFA is in weaving and writing with the focus of fantasy.

I’ve been a professional weaver since 1993 or thereabouts. At first, I sold at local and regional craft shows. Then I started doing wholesale craft shows, and sold my work to shops, galleries and boutiques across the country. I finally stopped doing the shows in 2007, but continued to weave for a limited number of retail clients and for a designer from Maryland. I still have several looms and a wall full of rayon chenille yarns.

When I was pursuing my MFA, I was weaving images in a technique called doubleweave pickup that allowed me to create representational images. Later, when I was selling both retail and wholesale, I was weaving wearables and throws. I stopped doing the images. They weren’t selling enough and they were incredibly time-consuming (an inch per hour).

Most of my weaving starts with color and whether I am weaving images or wearables, the color has to sing to me—and to my clients. From there, the work is intuitive, just responding to what feels right about image or color proportions.

As for the words, I’ve been writing and telling stories since I was old enough to spell and read. In college, I majored in Creative Writing. I’ve written freelance articles for both print and online magazines. And I’ve completed three manuscripts—two young adult fantasies and one adult fantasy romance.

The first two stories evolved page by page, totally seat of the pants with a lot of rewriting afterwards. This last manuscript which is starting to make the rounds of agents and editors, I wrote intuitively through probably half and then turned to scene cards and some general plotting for the rest. Even with the planning though, I am listening with at least one ear to the Muse.

At what point in your life did you start thinking of yourself as an artist?

I think I’ve always identified myself as a writer. The art weaving was a surprise to me, that I could create interesting images by just staying in conversation with the weaving. I really call myself a writer or weaver rather than an artist.

How would you describe your spirituality?

My spirituality is eclectic, earth-based and fluid. I consider myself a practical mystic.

How does your spirituality find expression in your art? 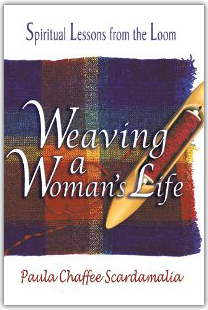 My themes in my fiction writing have to do with transformation, the power of love to transform and redeem. The stories tend to reflect mythic ideas. I also have three large image weavings that are titled Transformation I, II, and III.

And out of both weaving and words came my book Weaving a Woman’s Life: Spiritual Lessons from the Loom. Because while my spirituality finds expression in my work, my work also teaches me many spiritual lessons.

How do you connect with divine flow when you are creating?

So, in 1984 my mother, who was approaching 53, was dying of breast cancer. At the time, I lived about 8 hours away from her and had three small boys who needed my attention. A few months before her death, I put my youngest, about 18 months old, in the car and headed to my mom’s. I also took my small table loom with me on which I had started another large double weave pickup piece. While trying to fix foods my mother could easily swallow, and caring for my son, I also took time to work on the weaving. I think I finished about one or two inches of the bottom.

A month or so later, my mom, whom I adored and who was my primo cheerleader, died. I stopped weaving but kept thinking about what I would weave.

Two previous large pieces had towers as their central image, towers with roots, and flames going up the center. In my mind’s eye, this next piece would show the tower uprooted on the left side. I saw it clearly.

Still not weaving, I managed to sprain my left ankle twice within a period of three months while wearing a pair of my mother’s shoes.

Finally, about nine months after her death, I returned to the weaving. I didn’t weave the uprooted tower since I already had most of the roots done, but I kept weaving, deciding I wanted steps winding up around the outside of the tower. The image in my mind now, was of a tower that totally disintegrated by the time I reached the top of the piece.

As the tower fell away and the steps were small and rickety, instead of totally disintegrating they continued up into the sky, ending just a space or breath away from a door. This was a total surprise to me, not what I had envisioned earlier.

By the time I finished that piece and took it off the loom, I had processed my loss and my grief. It wasn’t gone, for sure. But there, in 5/2 cotton threads, was an affirmation of my mother’s life and journey—and my own.

I titled the piece, “Transformation III: My Mother’s Journey.”

Years later, I submitted it to be exhibited at the Pittsburgh Three Rivers Arts Festival, a place where my mother had once exhibited a print of her own. My piece was accepted. Life had come full circle.

That’s a long way of saying I don’t have any set process for connecting with the Muse. Whether weaving or writing, I trust my intuition. I stay in dialogue with the work and the Muse. That’s not always easy but it is almost always rewarding.

I listen to dreams which have provided the seeds for two of my manuscripts and images for several of the weavings. I use the tarot for inspiration, breakthrough and creation.

How do ideas come to you?

As above, dreams, myths, fairy tales, tarot—and sometimes lying awake in my bed at night.

How do you decide which ideas to pursue?

I guess just whatever seems to pull at me, to have the most potential for development and depth and imagination.

If you were going to teach your creative process to someone else, what would be one or two of the key things you would share?

Since 1999, Paula’s taught writers how to use intuitive tools like dreams and tarot to write stories from the deepest part of their imaginations. She’s taught at small private workshops on the East Coast, and at both national and regional Romance Writers of America conferences and meetings, at the 2014 San Diego University Writers Conference and the International Women’s Writing Guild. She leads intimate writing and dream retreats. Paula publishes a weekly e-newsletter on writing, dreams, tarot, and is the award-winning author of Weaving a Woman’s Life: Spiritual Lessons from the Loom.

On Facebook and Twitter, Paula posts the link to her Monday Message from the Muse video where she pulls four tarot cards for the week’s read on their creativity. 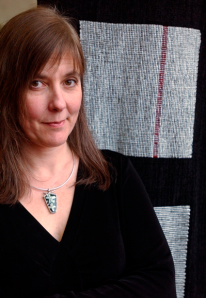 Suzanne Halvorson is a textile studio artist and partner in By Hand Gallery (IN). In 2012, she was a Visiting Lecturer at Indiana University School of Fine Arts, and at Earlham College (IN) and will be teaching at Purdue University for the 2013 fall semester. She has taught weaving workshops at Penland School of Craft (NC), Ghost Ranch (NM), Grunewald Guild (WA), and at HGA’s Convergence (CA) and for countless weaver’s guilds and conferences. Her work is published in Handwoven, Shuttle, Spindle, and Dyepot, and Weaving for Worship.

“My art is my spiritual evolution. Weaving is my true north and without it I don’t know who I would be — I consider it my calling. It keeps me seeing the world as a hopeful place. I look for beauty and inspiration every day.” ~Suzanne Halvorson

Listen to Suzanne’s Art as Worship interview on Empower Radio.

She goes on to say, “Weaving is what I call active meditation. Every step of the process is slow and intentional — it is very calming. There are times when I’m weaving, when I am really in the zone and completely connected to the work, that everything else disappears.”

Find out more about Suzanne at www.suzannehalvorson.com. Her work is represented by: By Hand Gallery, Bloomington, IN; Marigold Arts, Santa Fe NM; Penland Gallery, Penland, NC; Columbus Visitor’s Center, Columbus, IN; and Spear’s Gallery, Nashville, IN. 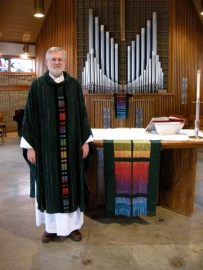 Pastor Lyle McKee, from St. Thomas Lutheran Church in Bloomington, IN, is modeling the chausble.

Her liturgical line is entirely by commission. Suzanne says, “I’m learning to say ‘No’ to commissions that may not be in harmony with where I want to go with my work. I choose the ones that I accept based on if I can do something new — something that inspires me. It’s not just the same old thing.” 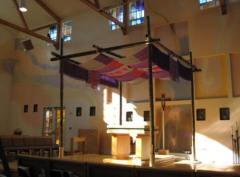 Lenten tent created to celebrate the 10th Anniversary of their sanctuary at Peach Lutheran Church in Danville, CA.

Suzanne will be teaching summer workshops “Weaving Explorations” (July 8 – 13) at Ghost Ranch and “Dyeing to Weave” (July 22 – 27) at Grunewald Guild. These workshops are for weavers of all levels.