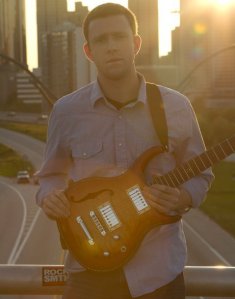 Guitarist and composer, Trevor Wolford, began his career at an early age sitting in with many jazz musicians in Atlanta. While attending Brevard College, he was able to extend his musical knowledge under the wisdom of instructors including Lou Mowad, Roger Cope and Stephen K. Wilson. Studying classical and jazz music attributed to his wide palette of colors that are found in many of Trevor’s compositions.

I’m always in the frame of mind that whatever happens today, I’ve got to give God the glory. When I play music, it’s my expression of that and I play every note like it matters.” ~Trevor Wolford

Listen to Trevor’s Art as Worship interview on Empower Radio.

While attending college, Trevor played in numerous jazz groups around Asheville, North Carolina and recorded with artists including the renowned jazz-vibraphonist Jason DeCristofaro. He currently resides in Atlanta and performs as a sideman to many groups around town. Trevor says, “Playing music with other people is a lot more fun than playing solo. The improvisation of jazz is like a conversation. I like that family aspect of playing in a group — relying on other people I trust.”

In addition to playing music, Trevor also loves to compose. About a current composition he says, “Many people talk about how they experience God in nature and I complement that with Scripture saying ‘the mountains declare His glory.’ I take that concept and apply it to music. I’m working on a composition right now that’s based on the sounds I woke up to one morning of the birds outside my window. It’s a work in progress, but I think the Lord inspires me in little things like that.” Trevor’s own group is expected to release a new album by December 2012.

Find out more about Trevor and listen to samples of his music at www.trevorwolford.com.